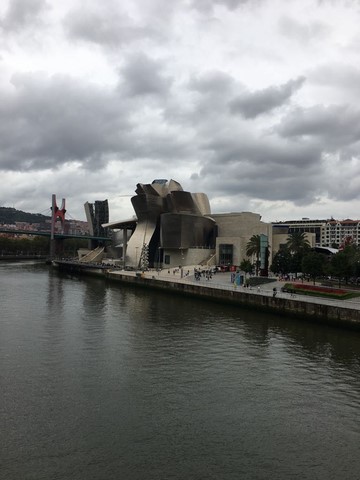 TOURS AND EXCURSIONS IN BIZKAIA.

Discover with us the corner more interesting from our land. Know your history, culture, gastronomy...
Some examples of excursions most demanded:

* Getxo-Vizcaya bridge. In Getxo see the Marina, the old port of Algorta, with its typical taverns where to taste some pintxo to pick up strength before facing the impressive bridge of and Vizcaya (, suspension bridge)

* Must-visit is the San Juan de Gaztelugatxe, scene of epic struggles. Along with this, Bermeo, typical fishing village, and can continue to the reserve of Urdaibai and Gernika, headquarters together House and its famous tree.

* Route of the castles. Vizcaya is land of fueros, Lords and lineages. So, found remains of fortresses and towers, sign of the wars of the middle ages. Most are not preserved in very good condition. Even so, is worth admiring its architecture and delving into its history. We started the path by the castle of Butrón, symbol of Vizcaya and monument of romanticism. Located in Gatika, it was built in the middle ages by Butron family and remodelled at the end of the 19th century by the Marquis of Cubas. For centuries witnessed continuous fights between families of the nobility. Surrounded by a natural park of 35000m 2 with more than 500 trees of different species. In the 1990s it was restored and opened to the public as a hospitality complex where friendly medieval shows. Currently is closed to the public.

Muñatones Castle, in Muskiz, declared a historic-artistic, next to the Palace and the Chapel, is open to the public and offers an extensive programme of visits, which can be combined with the El Pobal ironworks, in the same town. It consists of two rooms and a tower. access to this last is located under an arch on which you can appreciate the Muñatones shields: Salazar and Butron. Taking intoaccount family ties conc Lords in Butron, we understand some similarities found between the two constructions. These are, perhaps, the most famous, but the list of fortifications in Biscay.

* a trip by Guipuzcoan lands, of great wealth, to know their coastal villages (zarautz, orio...), the unparalleled San Sebastián (la Concha Beach, mount Igeldo, the Aquarium, its old town...), or enjoy a good meal in one of their cider.

-Excursion on the Basque coast. Tour of the enclaves more beautiful of the coast of Vizcaya, as San Juan de Gaztelugatxe, Mundaka or Gernika. You can admire the famous suspension bridge in Portugalete, the majestic castle of Butrón, in Gatika, as well as San Juan de Gaztelugatxe and Bermeo, typical fishing village. After this, you can learn about the reserve of the biosphere of Urdaibai, and end the tour in Gernika, with its famous tree and Casa de Juntas.


-Excursion to Loyola, San Sebastián and Zarautz. Tour of the best of the Basque coast, knowing so picturesque such as Zarautz and Getaria villages and admiring the spectacular cliffs of the coast of Zumaia.

Visit the sanctuary of Loyola, with its basilica (clear exponent of the baroque of the 18th century) and the House of Ignacio de Loyola, founder of the Jesuits. Pass by Zumaia and we enter the Medieval town of Getaria, and the village of Zarautz, surfing world reference, to end up in San Sebastian and its corners more characteristic (Monte Igeldo, la Concha Beach, comb of the wind, its old town...)


-Sanctuary of Arantzazu and surroundings. This tour combines important monuments with greenery typical of Basque landscapes. During the tour you can see houses and palaces with stunning prints, surrounded by a unique natural setting, such as the Urkiola and Gorbea natural parks.


-Visit to the Valley of Carranza, with the impressive Cave of Pozalagua


-Excursion to Vitoria and Rioja Alavesa. Perhaps the corners less known in the Basque country, although not for that reason less beautiful. We will visit towns such as Laguardia and Labastida, in Rioja Alavesa to know their helmets historical and famous wines.


-Bilbao and funicular de Artxanda. Ascent to Artxanda in the funi to admire the city from its observation deck. Back in Bilbao, we will continue to the old town, to know the Plaza Nueva, Santiago Cathedral or la Ribera market.


-Modern Bilbao. Walk around the buildings and locations more representative, that Bilbao has become world leader. The Guggenheim Museum, the Tower of Iberdrola, Universidad de Deusto, Plaza Moyua, Chavarri, Gran Via Palace... and Teatro Arriaga, perfect point to lose, if desired, by the old quarter, and taste the variety of tapas and wines.